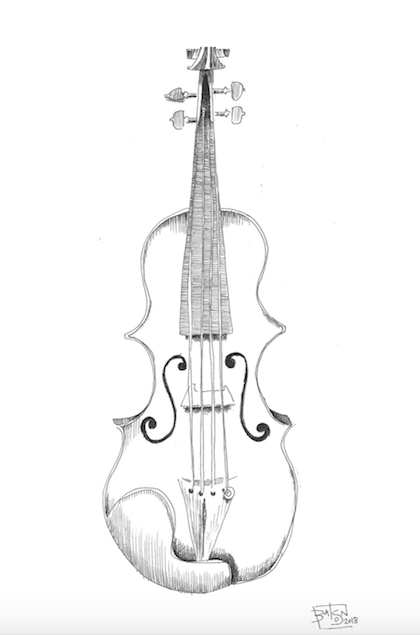 As a musician, educator and conductor, Ed Simons is the stuff of legend. He was listed by the Guinness Book of World Records as the oldest working conductor in when he led an orchestra through Barber’s Adagio at the Remembrance Concert for 9/11 at Grace Church in Nyack in 2017. Before passing away this summer, Simons was more expansive about his longevity during a History Channel interview. “I’ve been playing the violin for 91 years,” he proudly proclaimed. But his exposure to music, he suggested,  occurred before his first birthday. From “my mommy’s belly… I responded to the music my father was playing on his record player and it made me move.” Ed Simons lived a full century of music! 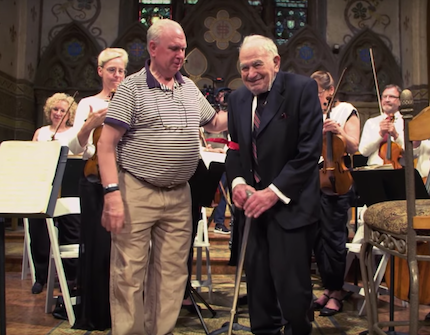 As a result of teaching hundreds of students and conducting before audiences of countless thousands, Simon’s legacy will continue through the centuries. On October 28 at 4p, the Rockland Symphony Orchestra will hold their annual Young People’s Concert at Rockland Community College. The concert will be renamed for Simons to honor their beloved music director and founder. As a student who later performed under Ed’s baton, Jacqui Drechsler shared some of her memories about the man and his century (plus) of music with the Nyack Sketch Log.

When did you meet Ed Simons? 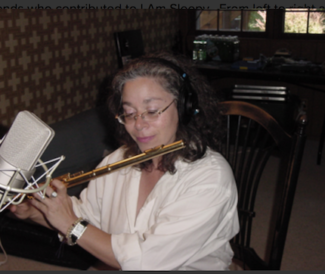 I met Ed when I went to a Young People’s Concert when I was 13 years old. That year, Robbie and Nina Gross from Nyack, Bill Bauer from Tappan and I founded the Palisades Chamber Players – a summer orchestra for youth, and Ed was one of our guest conductors.
He conducted for several summers.

Eventually, I was asked to join the Rockland Symphony Orchestra. Originally, it was called the Suburban Symphony (before my time) and rehearsed at the Rockland Center for the Arts.

What are some of the highlights of his musical career?

Ed started out conducting at the American Ballet Theatre Orchestra. He also conducted at least eight Broadway shows between 1948 and 1964, including “My Fair Lady’’ and “Camelot.”

Last year, at 100 years old, he conducted Barber’s Adagio at the Remembrance Concert for 9/11 at Grace Church in Nyack. This is an orchestra of local musicians as well as chair players from  the New York Philharmonic, the  New York City Ballet, and the Metropolitan Opera Orchestra. They are led by Avi Nagan, as concert master, who is truly a prime example of Ed’s lifetime approach to teaching. Avi studied with Ed as a young person and was mentored by Ed throughout his career.

The History Channel did a documentary on him regarding this concert – and his life, of course, and two or three years ago Suzanne Mitchell produced a movie called “Ed’ about him. His daughter Jo wrote a book about him and he deserved all of the accolades he received!

Presented by The Rockland Symphony Orchestra

Guest conductor, Maestro Murray Colosimo. The program includes Dvorak’s Carnival Overture and the Nimrod variation from Elgar’s Enigma Variations. Featured performances by Wynnum Sabile, who will perform a movement of the Greig Piano Concerto. Mr. Sabile started playing the piano at the Rockland Conservatory of Music at age eight and has been inspired to be a musician. He is currently a student of Jan Deats of Nyack. Wynnum was one of ten students selected to receive the Edward Hopper House Scholarship for Artists Curiosity.

Also performing, Mr. Laurence Lu who will perform his winning Concerto movement from the Schumann Piano Concerto in A minor. Mr. Lu has been studying the piano since the age of eight as well, with Mr. and Mrs. Zhao of Pearl River.

To honor Halloween’s arrival, the orchestra will play Danse Macabre by St. Saens and the program will conclude with Sir Edward Elgar’s Pomp and Circumstance March No.4

Ed often played for the Fellowship Community in Chestnut Ridge and in the last few years of his life also played with Annamae Goldstein, a violinist with the Metropolitan Opera orchestra at The Fountainview, an Assisted Living Home in Suffern.

It wouldn’t be misstating anything to say that he touched thousands of lives, between his teaching of violin students, teaching at RCC, playing and conducting. All positive.

Ed was a very exacting conductor. He always had a vision of what he wanted from the musicians in order to bring out the music. He had a dry sense of humor. However, he was quite charming with the young musicians who played in the Young People’s Concerts. These were winners of a concerto competition of the Rockland County Music Teacher’s Guild.

He expected them to be great performers – they were the winners after all! He always gave them a sense of comfort in what must have been the challenging situation of being presented as a soloist with an orchestra.

When did Ed start the Community Music School?

I think Ed and Janet, his wife (who was a violist) wanted to bring the joy of music to everyone, anyone who had an interest. Music education needs to start at a young age and so about 50 years ago they started the Community Music School, which is now know as the Rockland Conservatory of Music.

All of the classes were as little as a dollar, and if you didn’t have your dollar, you still got a class.

Music touches the heart and soul, brings out the best intentions and feelings for people and it also teaches discipline. And shows growth; students see that they learn, grow and move into different stages of music making, which is a very positive experience for them.

Nyack Sketch Log, Volume 2 will be available the last week in November. Fifty-five more sketches and short essays! Purchase an advance copy and get $5 off the cover price. Email your order to wrbatson@gmail.com or stop by the Bill Batson Arts tent at the Nyack Farmers’ Market on Thursdays.